Jill Bolte Taylor was a rising-star neuroscientist at Harvard when, at 37, she experienced a massive stroke that left her unable to walk, talk, read, or recall any of her life. It took her eight years to fully recover — a process that included relearning the alphabet and eventually retraining herself in neuroanatomy. We spoke to her about how the stroke changed her perspective on work, and what it means to be ambitious in the wake of a life-changing health crisis. I had no skills.

Jill Bolte Taylor was a rising-star neuroscientist at Harvard when, at 37, she experienced a massive stroke that left her unable to walk, talk, read, or recall any of her life. It took her eight years to fully recover — a process that included relearning the alphabet and eventually retraining herself in neuroanatomy.

We spoke to her about how the stroke changed her perspective on work, and what it means to be ambitious in the wake of a life-changing health crisis. I had no skills. I had no language in my mind telling me I was Jill. Without knowing who you are, you have no data about your life beyond the present moment experience of being hungry or being tired or being in awe.

So it was a process of regaining a worldview that existed beyond what I could see and smell and taste. One of my first priorities was to regain language. About three weeks after the stroke, I had surgery to remove the blood clot, and then I had an absolutely silent mind for about two and a half weeks after that. And then my brain started to think in language again, and as my language came back online my world got bigger and bigger.

I had to get control of that long before I was remotely concerned about taking care of myself. Did the people around you think you would be able to fully recover? My stroke was severe.

Cells died in my brain that were instrumental for language and mathematics. Some people in that condition would not have recovered at all.

What were your hopes for your recovery? It was really just the basics. I wanted to earn enough of a living so that I could feed myself and have shelter over my head. When I fell off the Harvard ladder, I essentially moved into an income level below poverty level.

Because I had no mind, I had no ability to work. I had no ability to earn money, and I did not have disability insurance. I ended up moving from the Boston area back to Indiana, where life is much more affordable. And I became extremely frugal. My earnings were below poverty level for the first eight years post-stroke — at least until the TED talk and the book went out into the world. What was it like to relearn language?

How long did that take? I remember my mom teaching me how to read. She had to teach me sounds — a-e-i-o-u. I had to relearn the alphabet. By about the three-month mark, I had the ability to understand and communicate about very simple things. By four or five months out, I could read, but I had zero comprehension.

For me to go back and read my own academic papers took a good four to five years. How did you stay motivated? You know, I ask myself that all the time. I had this curiosity. I wanted to know about the world again. I think part of that was because I had already been a competent human being — and so I knew the rewards of being a competent human being. I had known what it means to have connections with people and healthy relationships.

I knew the end goal. I knew where I was going, and that helped me put one step in front of the other. I was also so grateful that I was still alive. Another thing that was very helpful was that I was given years to recover. Were there people who treated you like you were stupid? Oh yeah. I had weakness on one side of my body, and it was clear I had no understanding going on in my face. And I was slow — I was emotionally slow, I was cognitively slow, and I was physically slow.

And people are impatient. It made me even more compassionate than I had been pre-stroke. A few years after your stroke, you started teaching college courses again. What was that like? I was teaching anatomy, physiology, and neuroscience, and I had to sit down and relearn the material. I would spend the two days before a lecture mastering that terminology again.

It was an enormous workout, but it was a fantastic exercise in pushing my brain to its highest capacity. It was what my brain needed to push it to that level of function, with a ton of sleep in between. How did your ambitions change after your stroke? It was clear after the stroke that it was going to be years before I was capable of doing the work I did before. I had a whole new perspective on who I was and how to make use of myself under the circumstances of what had happened to me.

Before the stroke, I was climbing the ladder at Harvard. I wanted to teach and do research. I was interested in understanding, at a cellular level, the differences between the brains of people who would be diagnosed as neurotypical and the brains of people who would be diagnosed with a severe mental illness. After the stroke, I had to mourn the death of who I had been before — but it was never my ambition to grow up to be that person again or to do the things that she had done. It made me angry.

After the stroke, I was spending literally six to eight hours a day on the phone speaking to people who had neurological trauma or their caregivers.

By the eighth year, I felt I had completely recovered, so I wrote the book. It was an enormous task for me to undertake, and at the same time it was incredible for my brain to challenge itself in that way. That was life exploding. Your TED Talk is one of the most watched of all time. Why do you think your story has resonated with so many people? Do you ever feel frustrated that you had a stroke? Oh my God, no. It took away all my stress circuitry. My left-brain emotional system went offline, and with that went all my negative judgment.

It took away all my emotional baggage from the first 30 years of my life. And it set me on a new path of possibilities. The job I had before was fantastic, and I was prospering and winning awards and having a great time. But when that was all gone, I felt this incredible sense of relief because I was no longer juggling a billion details.

So after all this, do you consider yourself an ambitious person? I think I will always be motivated to help people better understand their brains and how we can choose which parts of our brains we are using at any moment in time in order to create more peace inside of ourselves and thus to act more peacefully in relationship to each other. This interview has been condensed and edited. Already a subscriber?

She Was a Brain Expert — Until She Lost Her Memory

Jul 03, Minutes Buy. As she observed her mind deteriorate to the point that she could not walk, talk, read, write, or recall any of her life-all within four hours-Taylor alternated between the euphoria of the intuitive and kinesthetic right brain, in which she felt a sense of complete well-being and peace, and the logical, sequential left brain, which recognized she was having a stroke and enabled her to seek help before she was completely lost. It would take her eight years to fully recover. For Taylor, her stroke was a blessing and a revelation. On December 10, , Jill Bolte Taylor, a thirty-seven-year-old Harvard-trained brain scientist experienced a massive stroke in the left hemisphere of her brain.

My Stroke of Insight

Jill Bolte Taylor , a Harvard-trained and published neuroanatomist. In it, she tells of her experience in of having a stroke in her left hemisphere and how the human brain creates our perception of reality and includes tips about how Dr. Taylor rebuilt her own brain from the inside out. It is available in 29 languages. Desmond O'Neill, M. Bert Keizer , a Dutch geriatrician [3] , reviewed the book and described it as "neurosophy", where the author sees brain neurons as the foundation for religious experience. The book was initially released in October as a paperback by the author through the self-publishing company Lulu. 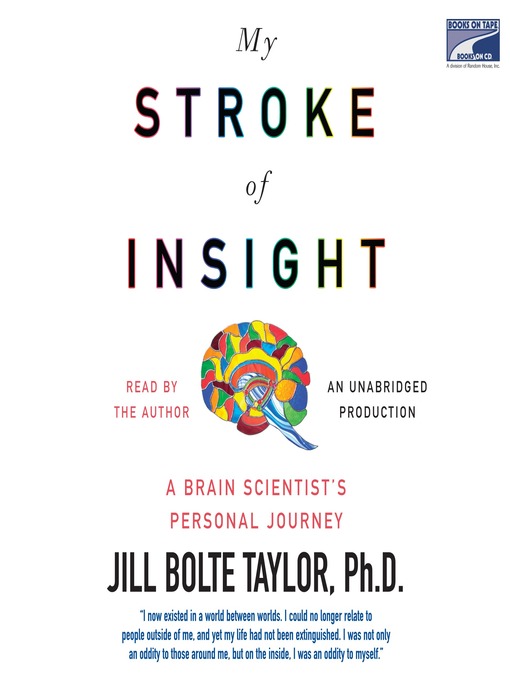 By signing up, you agree to our Privacy Policy and Terms. After suffering a massive stroke, Jill Bolte Taylor turned the negative event into a positive stroke recovery story. Now she shares her wisdom. Jill Bolte Taylor was a healthy year-old neuroanatomist at Harvard when, one morning in , she suffered a massive stroke in the left hemisphere of her brain. In four hours she lost her ability to walk, talk, read, write, and remember parts of her past.

Any cookies that may not be particularly necessary for the website to function and is used specifically to collect user personal data via analytics, ads, other embedded contents are termed as non-necessary cookies. It is mandatory to procure user consent prior to running these cookies on your website.